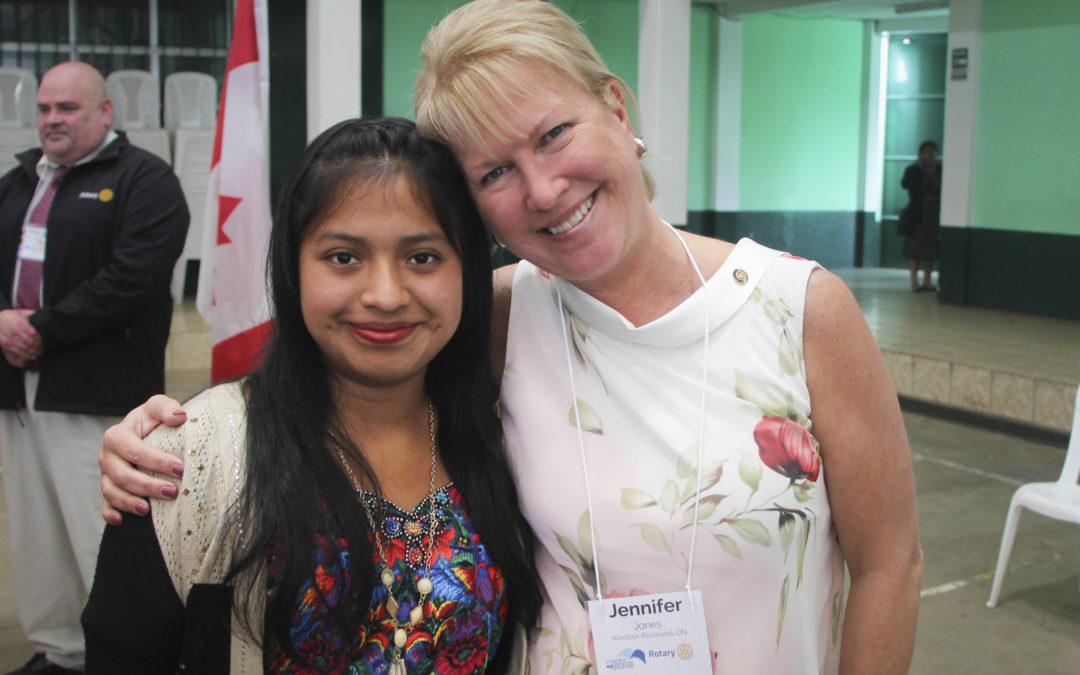 The Guatemala Literacy Project (GLP) was recently honored to receive Jennifer Jones, RI Vice President 2016-2017. Jennifer traveled to Guatemala to see firsthand the outstanding work of the GLP and attend the graduation of the student who she personally sponsored in the Rise Youth Development Program.

Jennifer is an outstanding Rotarian who currently serves as the chair of the Toronto Peace Building Summit 2018 and co-chair of the End Polio Now – Make History Today campaign to raise $150 million dollars. She is also the promotions chair for the 2019 Rotary International Convention in Hamburg, Germany and part of Rotary’s Strategic Planning Committee.

Jennifer’s connection to the GLP began years ago when she was pulled in by friends at the Windsor-Roseland club who told her stories about Guatemalan students and explained in concrete terms the impact of the GLP. “What sells me on wanting to be involved is the impact,” says Jennifer. “I said: ‘Okay. I’m in.’”

On her recent visit, Jennifer saw that impact firsthand in the life of her Rise Program student, Rosa. “When I heard she was graduating, I just thought: I’ve gotta go to that,” says Jennifer, “to support what you guys are doing, to say thank you, and to see firsthand what’s going on. It’s been magic. I mean it.”

One of the magic moments of Jennifer’s trip happened less than 24 hours after she stepped onto Guatemalan soil. As she and her fellow Rotarians entered the auditorium for the graduation ceremony, Jennifer had difficulty spotting Rosa among the mass of young people milling near the stage. Jennifer stood with Rosa’s diploma in hand, waiting to be called on stage to hand the diploma to Rosa herself.

Finally the moment came, and Jennifer climbed on stage to meet Rosa in person for the first time: “It was an electric moment between us. She knew that I recognized her. And the hug was just so genuine, so sincere. That hug was just to the core. That I actually got to give her her diploma—that was a magic moment. When we do good work, what we receive back—the ‘paycheck’ that we get—it comes in various forms. And that moment was a year’s salary.”

Soon afterward, Jennifer met Rosa’s parents, Marguerita and Felipe. “Both of them said right up: ‘We can’t read, we can’t write, but we know for our children to have a brighter future they need to have an education,’” Jennifer recalls. “Marguerita ended by saying that she was going to pray for my business, because, she said: ‘I want you to understand that I know you make money because you have a business. You are a woman in business. And so, for you to continue making money to be able to do things like this—I pray for that.’”

“I’m never going to forget that,” says Jennifer. “I think these young people who are graduating are going to come out of this with so much more opportunity than they ever would have had in any other kind of way. This is the gift that the GLP has created, and I’m happy to be part of the journey.”

Want to Get Involved?